Why the one-for-one business model is great? 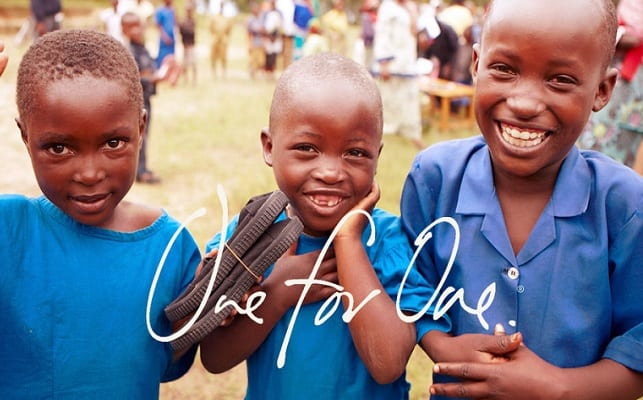 It is every man’s obligation to put back into the world at least the equivalent of what he takes out of it.

These are the words of Albert Einstein, one of the greatest scientists of the 20th century. Not many people know that apart from being an outstanding scientist, Einstein was also a passionate philanthropist. Just as not many people know that in fact Einstein was a real slow learner as a child. Or that the money he received from his Nobel Prize went to his ex-wife as a divorce settlement. Or that he was offered the presidency of Israel when the country was founded in 1947, which he declined.

As with many other great people, the father of the relativity theory had that urge to give back and make his own contribution to the greater good. Urge that I genuinely believe all of us have. The Internet and the connectedness it offers us through Social Media and platforms such as Indiegogo and Kickstarter have indeed given the stage to many individuals to pursue that urge and make a difference.

Indeed, philanthropy and good doing are no longer reserved for charity and non-profit organisations. Over the last decade we’ve redefined the meaning of philanthropy as a growing number of people seem to have found their own outlets for philanthropy and ways to leave their mark.

Still many, however, struggle being torn between their jobs, what they do for a living, and their craving for meaning and life purpose. It’s the perpetual dilemma of I want to give back but I really don’t have the time. Between work duties, time for friends, taking the kids to school or practice, family obligations and so on, people find it really difficult to sqeeze in social work that gives them meaning.

It’s a frenzy for most of us, our daily routines often don’t even leave us time for ourselves, let alone for luxuries such as say volunteering. As a business mentor, I often meet business owners who have this problem, indeed they are torn by their daily obligations and the desire to make a difference.

What if I told you that there is a way to work meaning into your business and leave a legacy doing what you do for a living? Not only you but your employees too, who most likely feel that craving for a bigger purpose just as much as you do.

One way to incorporate meaning into your life is through strategic philanthropy and in particular through the so called one-for-one model. Essentially it means that for every sale made, whether of a product or a service you provide, somebody in need gets the equivalent free of charge. As many of you probably know, the model is attributed to TOMS shoes, an American company that started donating a pair of shoes to a child in need for every pair of shoes bought by someone else. Many companies have followed suit doing the same in their own industries.

If you too crave for meaning but don’t have time to dedicate to philanthropy, the one-for-one model could be a solution for you too.  Here’s why I think it is great:

It ties in business results with social support

While creating a connection between business growth and impact is obviously great. Think about it for a second. When you know that for every sale you make you are in fact helping out someone in need, you are twice as motivated to keep pushing and to do your best to grow your business. And you will be growing it not only for the sake of growing it but to expand your social impact too.

One of my favourite companies doing that (although there are many more out there who do great work) is a bottled water company called Faucet Face. Not only do they donate money for each bottle sold but also a water filter to a charity called Third Millennium Awakening.

Gets employee engaged at all levels

As I mentioned earlier, the craving for life meaning is probably as large in you as it is for your employees. The one-for-one model  gives your employees at all levels pride to do what they do. From Accounting to Marketing and every department in between, people will feel that their daily work adds to a greater cause.  In other words, the sense of fulfilment and purpose is not reserved for a Social Committee team dedicated to organising charity events. Everybody benefits from knowing that their own effort, being a part of the larger corporate picture, contributes to the bottom line and to the impact being made.

Another company that I admire for the way they’ve implemented the one-for one model is Hand in Hand. A soap company that donates a bar of soap and a month of clean water to a child in need.  For those of us living in a first world country a bar of soap might be the most trivial thing, but a bar of soap is a luxury in other places and a powerful tool that prevents deceases and infections in poorer countries.

Your social impact is consistent

One of the biggest downsides to non-strategic corporate social efforts (such as cheque writing) is that they are never regular. If a company only donates money when times are good or when they have extra cash, the money doesn’t go a long way in actually helping anyone. For your philanthropic efforts to give long term results, you need regular contributions, whether of time, money or other resources.

For example, if TOMS were a regular company doing charity, they might be donating shoes to an orphanage once a year, say around Christmas. But operating a one-for-one model, they can make sure that a kid that gets shoes to go to school this year will get another pair of shoes next year too and will continue going to school.

Works for all types of businesses

Many people wrongfully think that the one –for-one model is only limited to retailers and / or manufacturers. Although it is mostly these types of companies that seem to operate under this model, probably because it all started with TOMS who are a retailer, it doesn’t need to be that way.  You could be a dentist or a legal services provider for example and you could apply the one-for-one model just as well. How? By providing your services to somebody from a poor community, who wouldn’t be able to afford your services otherwise, for every client you get.

The benefits of the one-for-one business model are many. From making your workplace more attractive to employees and improving retention to giving your clients another reason to buy from you to improving your company image, etc. Its greatest advantage, however, I think is the fact that it makes your work, as a business owner, meaningful and helps you leave a legacy through what you do for a living.

If you too crave to make a difference and want to know what the best way to go about it is strategically, please don’t hesitate to get in touch. As a corporate philanthropy consultant with many years of business coaching experience, I can help you integrate meaning and purpose into your business in a sustainable way. You can get in touch with me, Paul Davis, here.