Why writing a cheque to a charity is not enough? 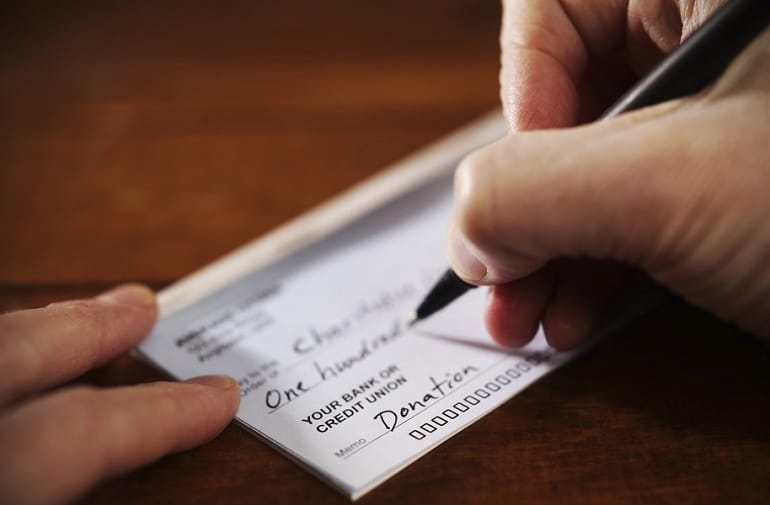 he couldn’t have been more right about money and the fact that it is only a part of a much bigger picture. If you think about some of the most successful businesses, these that have been around for decades and are still going strong today, such as Apple, Ford, Virgin, etc., are all companies that started off with a bigger purpose. In the process of making their mission a reality, these businesses generated huge amounts of money and became leaders in their industries, but it was more of a bonus rather than the underlying purpose of their existence. The founders of these companies were motivated to accomplish more than generate profits – they wanted to change people’s lives for the better through the products they created.

When it comes to corporate social engagement and impact, the same applies. Giving away money is simply not enough. If you genuinely want to create a long lasting impact that will actually make a difference you need to put your heart into your cause. There needs to be a deeper underlying motivation, some sort of a passion if you will and dedication that goes beyond donating a certain amount of money every month or every year.

Money is undoubtedly important but the truth is, there’s no single organisation or individual that can eradicate a social or an environmental issue by simply giving money away. Not even extremely wealthy individuals such as Warren Buffett or Bill Gates, who are passionate philanthropists, can make that happen. Even if they gave away all they have, it would still not be enough.

The thing about money is, it is not just about what is being spent, but how it is being spent. A lot of the charities out there, which some businesses partner with only to “tick” the CSR box on their agendas, are essentially remedying the symptoms of social injustice but not tackling the sources of the problems.  And when that’s the case, we can all pour money into these non-profits for eternity and the problems will never be solved. It’s a vicious circle.

Why? Because for money to make an impact, it needs to create the so-called multiplier effect. It needs to be spent to design and put in place a model that is sustainable first of all but also that brings in continuous involvement of more people, more passion and more resources. And writing a cheque to a charity often doesn’t do that for many reasons. Here’s a few.

No sense of pride among employees

Employees, who should be the most passionate advocates of what your organisation does in terms of philanthropy, can’t really feel any sense of pride because they are not actually involved in any of the impact making. Even if you donated a huge amount of money (and let’s face it, the majority of businesses can’t afford that), all your employees know is that an money has been donated and that’s it. Oftentimes, they wouldn’t even know what this money goes towards. In other words, cheque writing doesn’t really mean anything to your employees, it doesn’t create any engagement. Hence, it doesn’t help create the community and support for the multiplier effect to happen.

The same is true about your customers. Why should they care that you donate whatever amount of money to a charity they mightn’t even know what problems is dedicated to solving? As already mentioned, for your philanthropic endeavours to actually have an impact, you need a community around your cause to support it. You need for people to care and people only care when they are passionate about something and can see the impact directly. How could your customers be passionate about you giving money away when they don’t see what impact is being made and they don’t really feel a part of that? Make them a part of the story, give them a chance to get involved and be proud to be associated with your business. That on its own could make a much bigger difference than a cheque even if a big one.

No control over the impact being made

When you partner with a charity, unless you work closely with them and it is a charity you really trust, you can never know for sure how your money is spent. Oftentimes, your money will go towards paying salaries and overheads. While this is ok when the non-profit does actually make a difference in the community, you probably want to do more than just cover their bills, don’t you? Because in this case again, there’s no direct link between the contribution being made (money donated) and the result (impact made), which makes the whole exercise impersonal and un-engaging.

You could have given time, resources, knowledge or talent, any one of which could in fact make a much bigger difference but you donated money instead. A charity will go and spend that money on hiring or buying what you could have offered yourself whilst engaging your employees and maybe even your customers in your mission. This is not the end of the world if the non-profit you work with uses that money to create or maintain a sustainable model designed to eradicate the problems rather that alleviate the symptoms. However, when the latter is the case, you’ve mostly wasted your money on a temporary fix that doesn’t help anybody in the long run.

I’m not advocating against donating money and helping charities financially. Money is important and is needed of course. All I’m saying is that firstly, money is not everything and secondly, when it is spent for charity, it better be spent wisely. Ultimately, the purpose of giving is that a certain social or environmental problem is solved. But for that to happen there must be a healthy sustainable model designed to cure that problem, not to create a temporary fix. And a huge part of that model is the awareness and involvement of a whole community, not a single non-profit with some money and a group of volunteers. Which brings us back to the main point – just money is not enough.

As a philanthropy consultant I know how hard it is for business owners who are busy making sure that their organisations survive and grow to also think about philanthropy. Creating and putting in place a good social engagement model that actually makes a difference could be a challenge. If you feel you want to start creating an impact as well as grow your business, please don’t hesitate to contact me. You can get in touch with me, Paul Davis, here.